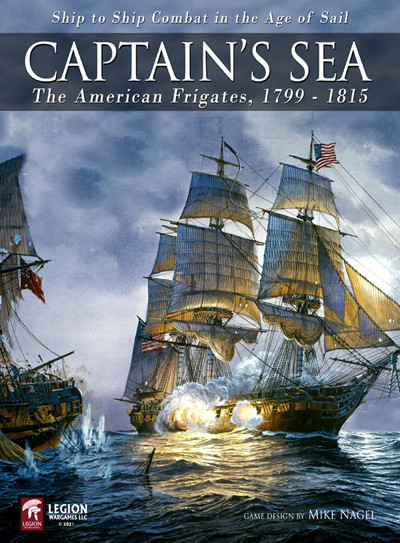 Captain’s Sea is a low-to-moderate complexity game for two players who take the roles as captains of the original American frigates (Chesapeake, Congress, Constellation, Constitution, President, and United States) or their opponents from the British or French navies during the turn of the 19th Century. All of the classic duels fought by these ships are represented in detail. Unlike other age of sail games that focus on fleet actions, Captain’s Sea puts you on the deck of a single ship with the responsibility of leading her to victory. You must maneuver against the wind and your opponent to achieve optimum firepower, as well as manage your crew as they scramble to man the guns, work the rigging, and repair battle damage, all while being hammered by the burning shot and flying splinters caused by your enemy. Can you keep your crew in good order or will you be the first to strike the colors?

The action of the game is driven by control of the weather gauge. This is done in a unique fashion by moving ships relative to both the wind and each other, stressing the benefit of position. The ship with the better position has greater flexibility in maneuver as each player predetermines his ship’s movement through a simple action selection process that does not require pencil and paper to track. Players must also allocate available crew points (a diminishing commodity as a ship takes damage) to man the guns, rigging, or other actions that the situation might mandate. A deck of action cards provides period flavor and swings of fortune. Throughout a turn, you as captain, are bombarded with difficult decisions that determine the fate of your ship.

Included with the game are ten scenarios, including such classic engagements as the Constellation vs. L’Insurgete (9 February 1799), Constitution vs. Guerrier (19 August 1812), and Chesapeake vs. Shannon (1 June 1813). Even those ships that did not fight a major engagement get the opportunity to play out a historical opportunity missed. Additionally, players will find it easy to create hypothetical pairings to see what might happen.