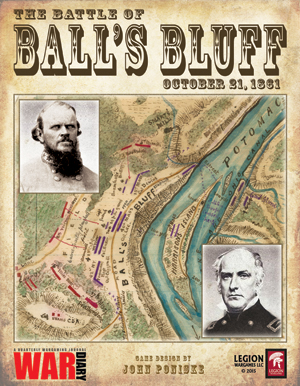 The Battle of Ball's Bluff October 21st, 1861 by John Poniske

This game is a joint production release from Legion Wargames and War Diary Magazine who offered it as part of a subscription promotional offer. This version of the game ships in a ziplock bag and includes a special 16 page booklet containing two full articles from the magazine which focus on the history behind the battle and the play of the game.

In the fall of 1861, General McClellan ordered his subordinate, Charles Pomeroy Stone, to make a demonstration on the west bank of the Potomac River, 35 miles from Washington, D.C., to see if the Confederates might react. A patrol had mistakenly reported a rebel camp ripe for raiding, so Stone, in turn, ordered Colonel Devens to advance on the supposed camp. Having done so, Devens found nothing of the kind. Confused, he settled his men in a defensive position and awaited new orders. Stone decided to send the remainder of the 15th Massachusetts across the river so that he might conduct a reconnaissance in force around Leesburg, VA.

Colonel (also U.S. Senator) Edward Dickinson Baker was charged with the operation. He crossed the river with his men. While a body of U.S. cavalry created a diversion near Edward’s Ferry, Union troops engaged a segment of 17th Mississippi Infantry. Baker immediately ordered as many men as possible to cross and support Devens. Although the Union troops on the east side of the river outnumbered the rebels more than four to one, Baker did not take into account that he could only transport 30 to 35 men across the river at any one time. Thus the Union soldiers could only trickle into battle while Rebel reinforcements poured onto the field. Ultimately, the army strength on both sides grew to approximately 1700 men.

Colonel Baker was killed late in the afternoon during a failed attack on the Rebel line. Before long, disorganized Federal troops were re-crossing the river. By early evening, the 18th Mississippi arrived and aided in an assault that fully routed the boys in blue. Their artillery abandoned, many Union soldiers were forced down the steep slope, called Ball's Bluff, and into the river. Soldiers swarmed the waiting boats. Overcrowded, several boats capsized on their way back to Harrison Island. An untold number of Federals drowned in their desperate attempt to escape. By day’s end, 223 Union men were killed, 226 were wounded, and 553 were trapped and captured by the advancing Rebels. In all, the Rebels lost 36 killed, 264 wounded, and 3 captured, for a total 303.

Edward Baker proved to be the only U.S. Senator to die in battle during the Civil War or, in fact, during any U.S. conflict. Accomplished, popular, and Lincoln’s good friend, his loss proved a great shock. This disaster also followed so closely on the heels of the Union defeat at First Manassas that Ball’s Bluff smelled suspiciously of treachery. Despite Baker being largely responsible for the debacle, Stone became the scapegoat. Soon after, Congress created the Congressional Joint Committee on the Conduct of the War, which would pursue investigations into officer conduct for the remainder of the conflict. Oliver Wendell Holmes, Jr., fought at Ball's Bluff and was seriously wounded there. Herman Melville was later to write a brief poem on the topic, “Ball's Bluff: A Reverie.” Ball’s Bluff was an important prelude to the bloodletting that was to come. It deserves its representative place in our hobby.